On the front page of r/anime today, filling the slot of the subreddit’s Daily Salt Thread, is a discussion titled ‘What scores on your MAL would make /r/anime question your taste the most?‘. I could stop here and let that post speak for itself, for why I think MAL and the community it facilitates is what drags down the potential for good, interesting discussions about anime online. But I might as well blog about it too.

There’s an unfortunate rule on r/anime that you can’t post discussions about streaming services or sites like MAL. Because of that, no-one on there is going to be able to question or help anyone else question how the services they use for anime affect what they watch. And there’s no doubt a community affects your view of content, for better or worse, whether you have Digibro’s concerns over elitism, understand Group Dynamics, or can simply observe how, if it’s not how they view it first-hand, it’s how people talk about it online that changes. And until there’s a ‘post your animeplanet’ post, I’m going to limit my complaints to the giant of anime rating aggregation.

On MyAnimeList’s about page you’ll see what activity is recommended; the place was built intended for ‘fans’ to share their ‘favourites’. But the skew of MAL’s communal rating system coincides with the French translation of its abbreviation as ‘bad’. A 7/10 on MAL is a ‘pass’, and 7/10 reviews, being only a ‘pass’, often read with little enthusiasm and turn out rather negative in tone. Despite this, the margin between a 9 and a 10 is so high for people, who tend to view the 7-10 scale as ‘average – good – great – masterpiece’. Some even argue that a 7/10 is bad because it simply isn’t good. Salt flies when someone gives your favourite show a 7. No! Anything but a 7!

I haven’t done a review since or before Konosuba, but the rating system I introduced there did its best, I hope, to emphasize that ‘average’ – what I call ‘decent’ – is in the middle of my scale. Perhaps it’s the school system that made people view 70% as only just a pass. And perhaps the reason I don’t write many reviews at all is because most read like high school essays that would barely scrape a pass themselves.

The majority of MAL’s reviews are abysmally written. In a ‘helpful’ post of guidelines on how to write your review, people are encouraged to start out by ensuring that they cover characters, story, art and sound, and cover them, and even score them, separately if that helps at first. Many reviewers however never stray from this format, and now the fact it’s considered ‘amateurish’ by the author of that guidelines post is a sad joke next to how MAL celebrates and defends artificially dissecting character and story as if they are in any way separable.

We’re also supposed to evaluate ‘enjoyment’ separately from everything else – but what value is there to art, any art, other than how we find pleasure in it? Splicing these things apart only works if you warp your perception of the work away from what the viewer encounters – character, story, music, visuals all together, all constantly affecting each other, all hopefully causing enjoyment. This paint-by-numbers, Ikea-wardrobe-style approach gives every review that uses it a fundamentally poor perspective on what character and story mean for each other. How do we know anything about My Hero Academia’s Deku other than the story being given of him? And how can we rate that story at all without considering the value of Deku?

It’s unnatural to ‘review’, as in ‘view again’, a show in such a dissected manner. It’s like trying to review the shapes and colours of a painting separately. You’re no longer actually reviewing the image that everyone sees, and when you splice ‘character’ out of ‘story’, your ‘story’ section is no longer reviewing the story either, nor your ‘character’ section the characters.

I hasten to say that because so many reviews do this, the reasons I have for highly rating shows like Angel Beats! are rarely voiced. I dislike MAL’s 10/10 reviews on AB! more than I dislike the site’s bitter ‘this show is scum and so are you if you like it’ rants. My opinion isn’t even unpopularly represented; and because all these spoiler-free reviews are so limited in how much they talk about the show itself, most attempts you make to go through something in increased depth get immediately treated as overanalysis. I should have written a paragraph on the characters in Durarara!!, not a whole article! Silly me.

The Ikea approach may be easier for some people, and easier for readers who are used to it on MAL, but it does not help you or the reader see more of or better into what you’re reviewing. They can follow your thoughts better, and so can you, but that’s because you’re hand-holding. The struggle with wrestling with multiple ideas and synthesizing them into concise sentiments is immense, but the pleasure of reading such writing and getting all these compartments of your thinking clearly and at once is what separates a safe style of writing from one that will stir a crowd.

I’d be more on board with these categories if they were disguised under more interesting sub-headings and one spoke to the other. You can start with ‘story’ in order to both outline the material and rate how competently its plot handles itself, and then move on to review the cast based on what they do to with the story. People so readily say art never exists in a vacuum, and yet put ‘characters’ in a vacuum when they review on MAL. And that style then invades blogs and other sites, and already too many think it’s a superior style to look at these things one-by-one just because everyone’s doing it and it’s easy.

It’s even easier to judge people purely based on numbers.

Back to that ‘post your MAL’ post. Back to how, as much as I’m as skeptical as Digi is over how people make their favourites things people will praise them for liking, I think judging taste – not even the people behind the taste, just the taste itself – based on a static list of favourites, whether it’s on MAL or in a 3×3 on 4chan, is the opposite of caring about their opinion. An infinity of discussions get started just because ‘you rated that 10/10, but not Stein’s;Gate? Whaaaaaaaat?’ and other asinine complaints. It goes for community opinion too.

Remember how people found ERASED’s spike in numerical popularity a talking point? I’m not sure how they did, or why MAL let’s you rate stuff as it airs in the first place. It’s meaningless to do and meaningless to discuss, especially since it gets put alongside finished shows that were reviewed and not simply hyped up or beaten down by the community. 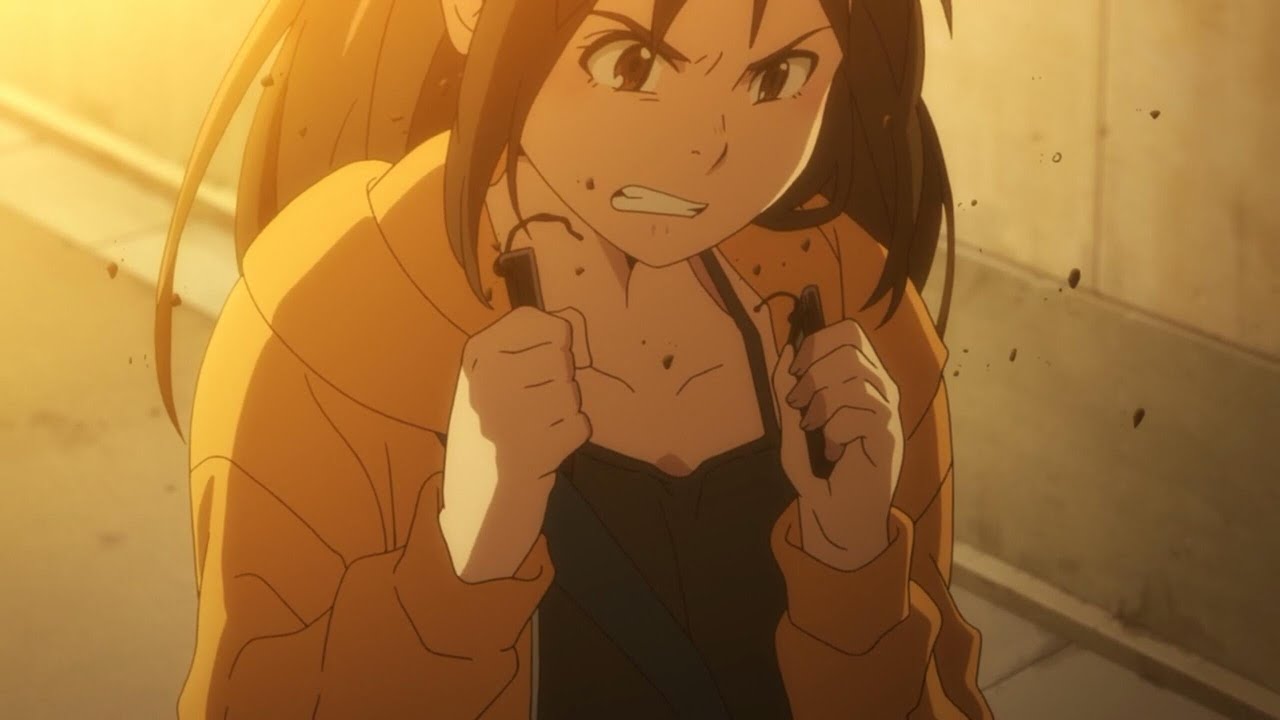 I agree with Digi that few people know how to actually rate the anime they watch, but people expect them to have regardless, and so we have a community that on the one hand encourages everyone to have their own subjective rating of a show, and on the other hand gets its kicks out of attacking just those numbers alone because of how they don’t align with the acceptable standard deviation from True Anime Taste™.

And hearing so much about these ‘masterpieces’, I’m as bored of them before I watch them as many high school students are bored of Shakespeare before they’ve read a line from Macbeth. Whenever something is said to be undoubtedly a masterpiece because everyone says its one, not because you’ve understood for yourself the expertise of craftsmanship going into the work, be it anime or A Midsummer Night’s Dream, you’ve done more to argue against the quality of the work. If it really is incredible, you can tell me why. Don’t point me to someone else’s review and pretend you felt exactly the same when watching it. Especially when that review divides character and story again.

MAL’s standards for what constitutes a good review, and the perspective the community forces on people of what ‘good’ is  – an 8 or higher in most cases – and what ‘good anime’ specifically are, let alone its garbage dump of a forum, have made me never want to touch the account I made there long, long ago. MAL won’t let you delete your account, however, so my list lies empty as a tombstone for the thought I once had that making a list of all the shows I watched like everyone else was a good idea.

The very notion of being encouraged to go around in life with an ‘I have watched this many shows’ meter, like an opinion-validating experience bar, pisses me off to no end. A new site for critics to join and have their limited pool of opinions aggregated, senpai.co, forces you to go through a ‘taste test’ that registers how many shows you watched and what you thought of them and requires you to ‘pass’ some invisible boundary of good taste to join. Screw. That.

If you want to know my opinion on a particular show, ask me. We can talk about it – my opinion, not some number surrounded by a bunch of other numbers. My wholesale numerical appreciation of anime isn’t something I have to background every thought I have on anime with. And MyAnimeList forces you to do that. And that’s why I’m not on MyAnimeList.

18 thoughts on “Why I’m Not on MyAnimeList”