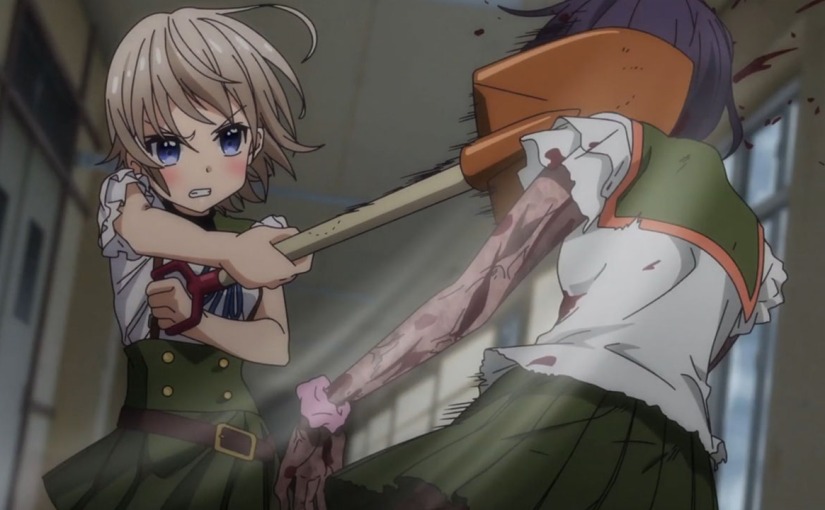 I want to hand this series an award for continuing to develop and appreciate every ounce of its main cast every single week. With the girls all separated, each of them now has to deal with their own personal crisis in order to save the group. What stood out the most for me was how Kurumi – despite being incapacitated and only having lines beginning with ‘GGGGAAAARGHH’ – and Yuki had their strengths so successfully emphasised. Kurumi had been swinging Shovel-kun with all her might, but Miki (and Yuki, finding the bat so heavy) were shown to lack the raw strength needed to keep the undead at bay. Yuki, on the other hand, had the inner strength to keep a promise from Megu-nee – which may be the biggest factor in her delusion we’ve seen – whereas Rii-san lacked the willpower to keep her promise to Kurumi. Rii-san’s failure may be Miki’s salvation though, so it can be said that the girls need their individual weaknesses in order to survive as a group.

Relationships were also stressed fantastically. Miki’s request to Yuki to make her happy echoed everything that her antics – especially the swimsuit episode – had meant for her; Miki’s plea for help from Kei echoed all the strength she had gained from her display of bravery, keeping the reality of entrapment at bay, escaping just as Miki was able to by using her music (that wonderful song again). But the memory of the car scene takes the biscuit – not only does the whole conversation act as a microcosm for everything that’s happened (treat every line as an indirect summary of an aspect of the show), but Kurumi’s trust in Rii-san, to not have her hard work go to waste, made Rii-san’s inability to fulfil it so much more painful to watch. There’s bitter irony in the fact that it’s more painful to see her not slice into her friend than it is to have her do it.

Of course, the gradual breakdown of Yuki’s delusion was the centrepiece of this episode. I’m so happy that it wasn’t dealt with in a single – a series of – intense, hysterical scenes. Yuki’s tenderness shone through, as did her ability to maintain her happiness, as she came more and more to realise the truth. Instead of getting away from her delusion of Megu-nee, she followed it to what that delusion was trying to get her towards; honest acceptance of what the club had lost. You can keep living if you lose a part of yourself, but you can only keep living properly if you properly acknowledge that it’s gone. Only now can Yuki graduate like she wants to, and live her ideal of youth even stronger than before. Another swimsuit episode on the roof? Nah – we’ll go to the ocean!

What I wasn’t expecting, however, was Megu-nee to get such an integral bit of development before she was left to rest in piece. Only by realising what she did in the swimsuit episode could Miki have fully understood Megu-nee’s impact on the group and what she was really striving for – for them to LIVE. Is it her kind nature that managed to override the infection in small ways – getting as far away from the group as she could, and trying to access the medical supplies, and hoping in her diary for the girls’ safety – or are the other zombies simply trying to live for what they strive for the most too? Does an infected child know they’re biting someone, or is that, in their mind, them reaching out to someone as a friend? At any rate, Megu-nee’s character has made Gakkou Gurashi! a show that truly understands the significance of the dead, and it’s only added more and more to the emotional payoff each week. These feel like enlightening feels.

Other small things are worth thinking about; the unearthly aura of the dead is being seen less and less, and a lot is symbolised by the cinematic change – from the sense that the threat of the bioweapon is at its peak to Yuki’s gradual acceptance of the horrors (and if she can see them more clearly, how important that is for the survival of the club). The way Yuki saved Miki, moreover, began the episode with the feeling that Miki would be in danger without the aid of who would become the real saviour of the club. Then there was Miki’s refusal to chase after Taroumaru, with more pressing concerns at hand. But neither did she chase after the dog mentally – after getting the medicine, her priority seemed to rightly shift to human survival first, dogs second.

The brief mention of home was all I needed to satisfy my concerns of a lack of thoughts on parents. The way the subject shifted so quickly from it makes it seem like parents are the last thing these girls want to think of, which makes them all more like Yuki in how they don’t meditate on the bitterest parts of reality. It also adds to the fact that school life really does separate you from your family a lot, and questions about how the show deals with that theme will abound after next week’s ‘graduation’. With that in mind, the sight of the dead burning on the roof gave off a hint that the ultimate end to the horrors of the school might be the ultimate end of the school itself. When you graduate from school, it becomes an institution you can’t return to. I can only imagine that the girls’ graduation will be a cataclysmic end to their establishment – the power’s already out, after all. The safety of the place has already collapsed – the walls that keep the dead out. Now all that remain are the walls that keep the living in.

Yuki may be coming to the rescue, but she still has some horrors to face that she hasn’t become accustomed to yet. The reality of Kurumi and Taroumaru are more than just scary images – as Yuki said, the fear of losing her club outweighs the fear of accepting reality, but does she know how much is at stake?

Rii-san’s decline in power ought to lead to some tragedy surrounding her. I completely empathise with her lack of inner strength and how she needs someone else to fill it. My biggest worry is whether Yuki or Miki will fill it through the medicine, or through some other means. Shovel-kun has already been the one to end Megu-nee; will he put Kurumi to rest too?