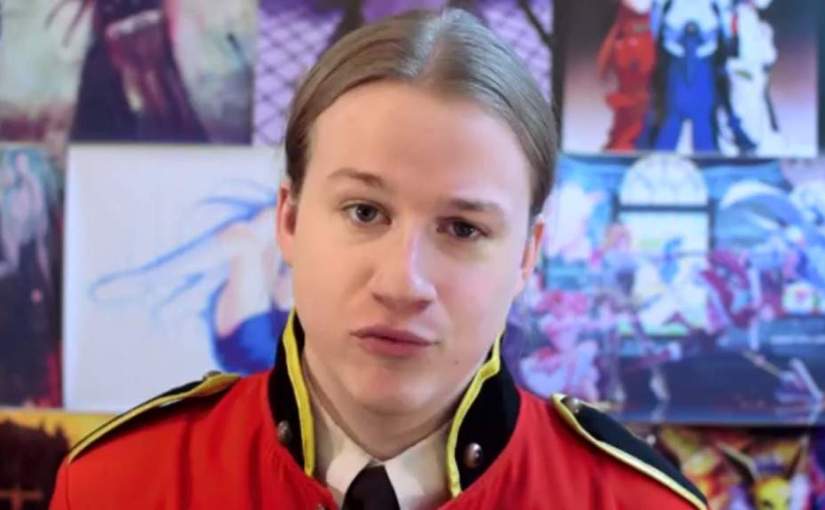 So I sat down recently to watch Glass Reflection’s ‘Should You Watch’ for Kiznaiver, one of the more bizarre and experimental shows we have this season, which I’ve had a lot of fun writing my weekly seasonal Impressions for. It’s a show all about characters connecting to each other, which is what stories are all about in the first place, and so every beat of its disarray of character developments reeks of a kind of meta commentary too.

And I think it’s fundamental to notice that, or at least that it’s doing something that’s conscious of itself. Which is why I found GR’s approach to it extremely underwhelming.

GR deserves a lot of praise for how polished and well-paced his videos are. He hooks viewers into his opinion better than 80% of shows airing in any given season. But once we get onto the views themselves, things start to get hairy. You may agree or disagree with his opinion of the show, but the first issue is: what is there to do beyond that? He calls certain characters bland and the plot aimless without any unpacking of his viewpoint, without any traceable reading of the show that could persuade you that his view is correct.

Of course, he’s trying to be ‘spoiler-free’, but any demo you buy for a video game actually gives you some content from the video game; not stuff that will ‘spoil’ the overall experience for you if you choose to go the whole 19 yards and buy the thing, but stuff that makes you feel engaged with it. A recommendations video should likewise be able to let you sample some of the show in support of his thinking, to show how the reviewer has engaged with it. Especially since this is one show where an increased attention to detail renders many of GR’s comments almost completely beside the point.

GR complains that there’s no clear direction for Kiznaiver’s plot, but he takes this from a correct observation into a negative criticism without any explanation or treatment of why the show might be like that. Not knowing where Kiznaiver is going is in fact essential to our connections with the cast. The experiment these guys are stuck with requires them to not know it’s next step, and I hope everyone who has watched it has realized that since what we’re doing most of the show is empathizing with these characters and thus sharing in their ‘pain’ just as they share it with each other, we need to be kept on the side of the test subjects and not know where things are going either.

To call such a purposefully and necessarily obscured plot ‘poor’ as Glass Reflection does is being over-reliant on plots that are clear-cut. I’m sure we can all remember a story in the past that had us absolutely hooked despite the fact that, or because, we had no clue where anyone was going whatsoever. Not every plot is an understandable direction. Has anyone ever read anything by James Joyce?

Most of the other points GR makes similarly riff off a need for things to be simply definable/categorizable. He says the MC has no likeable trait, but what I love about the MC is that he has no likeable trait; that’s his trait. His whole character is about not being open about his character – about not feeling anything. And that emptiness becomes its own kind of substance because of the other characters’ interactions with him. Why is an experienced reviewer like GR doing the amateur thing of evaluating characters as individuals, especially in a show all about taking them out of the separate comfort zones? Moreover, to discount characters because they stand out with having just ‘two’ definable traits and wanting them to have already become so complicated in a meta show that’s all about breaking down these ‘seven deadly character types’ is more or less entirely missing the point of the story. It’s like complaining that a hero in a ‘zero to hero’ show out starts weak.

Glass Reflection’s first impressions of Kiznaiver don’t give us any more than the surface of his opinions, and it’s hard to think they’d be persuasive, regardless of whether they’re valid, to anyone but people who are already fans of his iconography. And he’s built good, engaging iconography. But the opinions themselves are incredibly contrived ways of approaching such an interesting show. His review of Otonashi’s character in Angel Beats! is filled with the same flaw; characterizing him as if, under the microscope of a review, he’s completely cut off from the rest of the cast and the story. This is not how any show is watched when you sit down with it, and not how one should be reviewed either. Especially not Kiznaiver.

I know why GR is popular, and power to him. But to me he often sounds like a talking comment section, and he could do far more with his fanbase than talk and perhaps even think in the kind of bolt-together, paint-by-numbers phrases that have become colloquialized into MAL-speak and push a review away from any engaging discourse. He moulds a show trying to break out of genre and generic expectations right back into such a fixed design. He automatically wants a character to be ‘relatable’, which is the common expectation Kiznaiver actively disrupts in its early episodes in order to make its cast more than just individually relatable, just like Kill la Kill worked against the expectation of leering at fanservice in its first three episodes. Katsuhira becomes a different kind of relatable; that distant person we all know or knew, who we connect to not because he gives us something, but because he doesn’t. He holds back. And we want to reach out to him because people around him do. And we fulfill the goal of the Kizna project in our own viewing experience.

We can have far more fun with shows like Kiznaiver if we drop these iron expectations of a clear plot and ‘relatable’ characters, and listen to what the show may be telling us about the need for those very things. And then we find a greater clarity and a greater relatability in the product of our intuition.

The next time someone calls you out for ‘over-analysis’, throw them some Mother’s Basement. A critic who made his name picking apart the OPs of popular and influential shows, he won’t rest until he’s pointed out the significance of every detail and directorial choice he can spot. END_OF_DOCUMENT_TOKEN_TO_BE_REPLACED

END_OF_DOCUMENT_TOKEN_TO_BE_REPLACED

Journalism teaches you one thing fast; you’ve been saying too much. Stop. Cut the crap. Doesn’t that make for a more exciting read?

Yet, the standard style for an anime review online is overburdened with length. Paragraphs are used to explain what should be put in a sentence; the same thoughts are repeated in different words, or different buzzwords. This blog too used to pride itself on its ‘long sentences’, but that About page needs an update. Anime reviewing needs an update. Doing something for longer, unless you keep up a flow of new ideas, material and engaging stylistic features, naturally makes your prose less powerful.

The same goes for the shows you’re reviewing.

END_OF_DOCUMENT_TOKEN_TO_BE_REPLACED

Some reviews are just terrible. We all want to be polite, to others and ourselves, when we think about how other people present their opinions. But be honest with yourself: you’ve read, or at least glanced over, some truly terrible reviews. END_OF_DOCUMENT_TOKEN_TO_BE_REPLACED

I’m not sure whether to count this as an actual ‘review’ of Plastic Memories or just my thoughts on why I seem to disagree with every fan of the series I come across online as far as how effective the finale was at finishing off what had already been an incredibly hit-and-miss series. I’m no different to the next anime fan who enjoys a good weepy time with moe girls, and I won’t deny that the climax of PlaMemo left me with a slightly damper face. But after the feels, the credits and the obligatory epilogue, I was left with one resounding feeling overall:

I’m not going to remember this show.

END_OF_DOCUMENT_TOKEN_TO_BE_REPLACED 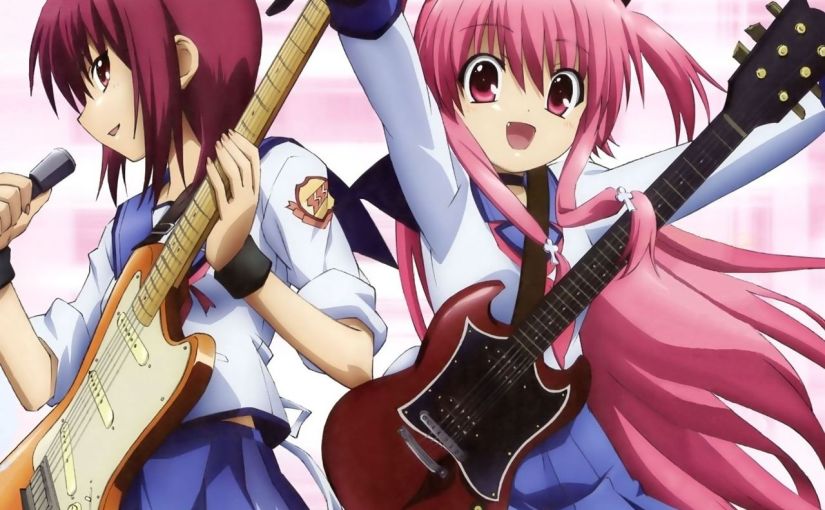 With the new Angel Beats! special episode released yesterday (I could drool all over it in a review, but I’d run out of saliva) and the VN having likely already come out by the time you’re reading this, I think it’s time I talked about my favourite anime that I’ve ever seen, in both sub and dub, on a laptop screen and on a TV. It may not be the ‘best’ anime – if you can somehow find a way to give something such a title – but I’ve always been one of those people who have done more than just love it. Yet, many people criticise it for one main ‘flaw’, which is usually phrased one way or another in any discussion on the show I encounter: it’s too short.

Has anyone considered that Angel Beats’ brevity may in fact be one of its most important features?

END_OF_DOCUMENT_TOKEN_TO_BE_REPLACED

It’s been a while since my last post – seems post-exam stress hits you harder than the worries you get before. But the lack of exams has also meant I can watch more anime, to the point that I finished my first ever binge-watch today: the entire series of Ano Natsu de Matteru. A brisk, poignant, well-orchestrated romance that might not be on every otaku’s radar. Aside from some unnecessary overuse of sexually-charged scenes to demonstrate the awkwardness of certain characters and situations, I enjoyed everything it had to offer. It was hardly a sci-fi masterpiece like Eve no Jikan was, but it was primarily a romance, and it excelled in that field.

Once it was over, however, I couldn’t help but compare it to the currently-airing (and nearly finished) series Plastic Memories. END_OF_DOCUMENT_TOKEN_TO_BE_REPLACED

I’ve been wondering about something after reading this article; there’s been a lot of talk on the current issue of ‘Yuri Bait’ in Hibike!, and I’d like to share my thoughts on it as the next episode nears.

END_OF_DOCUMENT_TOKEN_TO_BE_REPLACED

If you’re telling a story about boredom, how do you make it interesting?

The obvious answer is that it’s all in how you tell it. But Hyouka goes one step further, using the structure of the series as a device to further the effect of its fascinating protagonist and his development over the series.

END_OF_DOCUMENT_TOKEN_TO_BE_REPLACED

Specific censorship is nothing new or strange when it comes to China – only a few years ago they were banning films with time-travel. END_OF_DOCUMENT_TOKEN_TO_BE_REPLACED

As much as I can rely on anime as an ice-breaker, one topic is doomed to freeze over any conversation with most of my anime-watching friends. One of two words will spark it off, and the rest will be a long catalogue of indirect abuse, worn out ideologies and worn out faces as a few of us try to get back to talking about what we love.

We’re talking about ‘subs’ and ‘dubs’.

END_OF_DOCUMENT_TOKEN_TO_BE_REPLACED

I watched the first episode thinking it would be the new ride of my life; I left after the third.