After simulcasting a few episodes of Interspecies Reviewers, Funimation have removed the series from their platform.

They provided AnimeNewsNetwork with the following statement, which sends some clear messages regarding how they view and value the content they provide:

After careful consideration, we determined that this series falls outside of our standards. We have the utmost respect for our creators so rather than substantially alter the content, we felt taking it down was the most respectful choice.

Funimation’s willingness to release this kind of statement to subscribers who looked forward to the show is disappointing to say the least, but not surprising

given how they’ve ‘altered’ their shows in the past. It’s hard to listen to a company talk about having the ‘utmost respect’ for anime studios and the creators they work with when they believe they must default to ‘altering’ something if it doesn’t fit their own ‘standards’. Importing foreign media should be about appreciating foreign culture and perspectives, even when it comes to pornographic and taboo material. Localization should be about making a story make more sense in another culture, not altering it to satisfy some self-elected representatives for an entire country’s ‘morals’.

Speculations have spread over the real reason behind the removal of the show. Though streaming services compete at a rapid pace to pick up new titles, its hard to imagine that no-one at Funimation who believes in these so-called ‘standards’ completely ignored source material, or had any reaction after the first couple of episodes. How could anyone even read a premise about reviewing ‘interspecies’ brothels and expect anything less than frequent scenes of questionable soft-core pornography?

It’s possible that Funimation didn’t make the decision themselves, and instead recieved pressure from their parent company. Sony have already gathered a reputation for censoring Japanese media into oblivion, though it should be noted that Funimation are owned by a different subsidiary of Sony (Sony Pictures) than the company (Sony Interactive) that as been behind many recent video game censorship cases. At any rate, cancelling the show in this manner has surely cost many people the jobs they were contracted for. Brittany Lauda – a voice actor who has worked on dubs for Made in Abyss, Dr Stone and many other series – explained in a recent AMA that she only discovered the show had been ‘dropped’ when everyone else did.

The removal of Interspecies Reviewers from Funimation’s catalogue could have made it harder for fans, reviewers and other content creators to experience the show without resorting to piracy; fortunately, AnimeLab appear to have picked up the series. Regardless, shouldn’t the paying customers of Funimation be deciding what lies within their ‘standards’? Cancelling a show they advertised as having available surely falls within the realms of false advertising. The ‘statement’ they released doesn’t even contain an apology for the mistake they made picking it up, if it does indeed fall outside what they deem acceptable for broadcast. 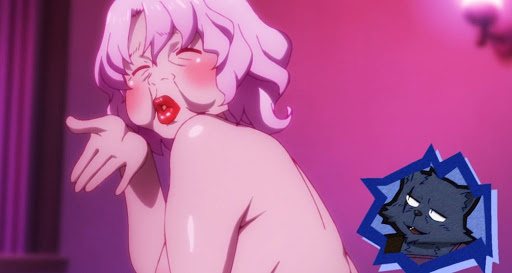 While Interspecies Reviewers wears its love of the perverse on its sleeve, it’s also an extremely sex-positive show, particularly when it comes to the area of sex work, and it has its mind set on the importance of boundaries around any bizarre fantasies. In many ecchi shows, a lot if the ‘fanservice’ comes at the expense of the female cast’s agency. But in Interspecies Reviewers all the girls providing their ‘services’ to the viewer are canonically consenting and being paid for their labour. Moreover, while the reviews of each brothel may ‘objectify’ the girls, they do so in regard to their fantastical elements. The show is completely disinterested in the idea of ‘reviewing’ real people; it’s all about how one horny species sees another.

Pornography is a matter of balancing both the fantasies that satisfy you and the boundaries you place around them. It is possible for fantasy to affect how you see reality, but it is more important to remember that you are able to control what kind of impact, if any, it has. It’s significant that Funimation have reacted so severely to a show that pays more attention to this dynamic than many other ecchi anime. One of the most perverse shows to come out of the last few years also happens to be one of the most mature when it comes to how it manages its extreme content.

This is something AnimeNewsNetwork could learn from: for their preview of the Nekopara anime, the site could only assemble a team of reviewers who had no interest in catgirls at all. This of course led to bemused commentary about the show being vapid and aimless for anyone who isn’t into the fetishization of virtual girls with catlike qualities. They likely only held off on the usual critiques of this media being ‘pedophillic’ and such because Nekopara was originally made by a team of women, not the ‘misogynist’ demographic they like to pin everything they dislike on. Of course, fetishes work like catalysts; they made what appears mundane to other people richly indulgent for others. What would be the point of reading the reviews of Ashigei Shoujo Komura-san from a panel without anyone who is turned on by feet? When publications have the ability to host a range of perspectives, at least one of them should come from someone who is actually part of the target market.

It appears that Funimation don’t care about their own target market either. Removing an anime for violating undetailed ‘standards’ sets a dangerous message. Many aspects of otaku culture and media, including many shows hosted on Funimation, are about setting one’s self apart from any normative community. Many otaku communities seek to come across as ‘beyond hope’ through their extreme fetishes in order to indulge in a total escape from reality. If Funimation will interrupt the broadcasting of a work because it’s too ‘immoral’ for their public image, what will happen to future anime that will try to further push the boundaries?

Previously on this blog, I advocated to anime fans that ‘Funimation is not your friend’. Now, if you’re a fan of ecchi anime, it’s better to say they’re your enemy.

Glad to be back in the saddle here. Reminds me, I have an illustration of two people having sex on a horse. It’s from the 19th century, and has a poem to accompany it. Don’t ask why.

I’ve been trying to work on my writing style for a while, while also being in a creative drought, so apologies for the lack of content over the last couple of months. I want to get another article out every 2-4 weeks from now on.

Thank you very much to KokoronPlush for becoming a $10 Patron: more than anything, your money helps motivate me to improve my work and get more of it out there.

Please consider supporting UEM! on Patreon if you want more articles like this one!