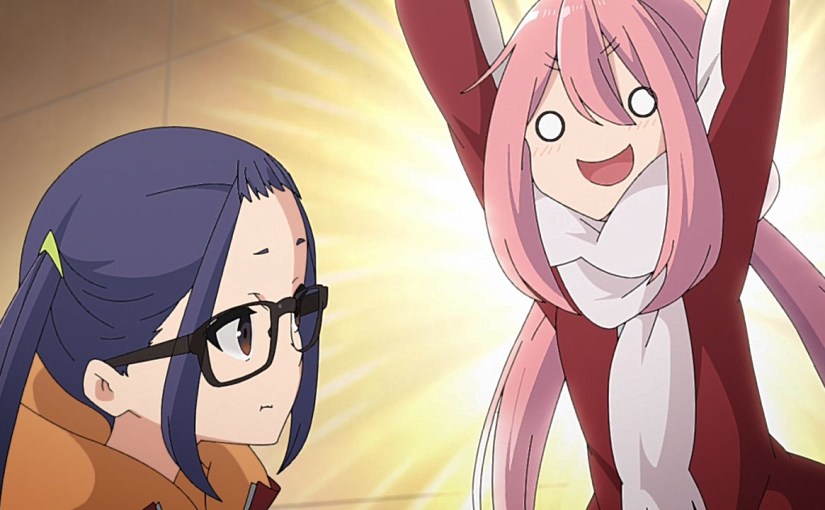 Many shows have their blissful moments, but some anime dedicate themselves entirely to bringing the viewer to a state of peace. Iyashikei, or ‘healing’ anime, build themselves upon a foundation of wanting the viewer to feel stress-free, and better in touch with themselves and the world around them. It was no surprise that Yuru Camp, one such show about a group of young girls finding fulfillment by camping in the great outdoors, proved to be hugely popular when it aired. But Yuru Camp goes beyond mere bliss in what it can inspire in its audience, and in how it encourages us to break down the limits we can set around finding peace in our own lives.

It’s hard to spoil Yuru Camp’s plot, as we see the main conflict of the story already resolved in the first scene: Nadeshiko and her friends gathered around a campfire, all together, all exceedingly comfortable and content. Originally a manga by ‘Afro’ and adapted under the helm of Yoshiaki Kyougoku in his directorial debut, Yuru Camp is about Nadeshiko finding happiness through these girls, and about Rin breaking away from her solo camping hobby and seeing what joy there is in camping with other people. It’s about all the girls’ lives, and all the little joys that complete them, connecting together through campfires. It’s significant that we bypass any mystery as to whether Nadeshiko and the others will find what they seek – what matters is the journey, not the destination. 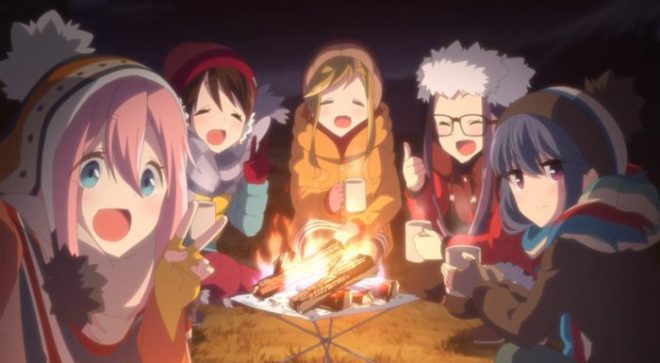 The beauty of some of the campsites the girls visit mustn’t be understated, but it’s their experience of them that makes them special for them, and for us. The same could be said for all Japanese afterschool clubs, with one arbitrarily selected room in the school becoming much more than itself for those who call it their clubroom. But in Yuru Camp, the OutClub’s trajectory is always away from their clubroom, which isn’t even a proper room to begin with – a tight squeeze for its members, as though it’s a metaphor for buildings feeling like a vice for people who want to spend their time in the great outdoors.

Considering each episode’s structure, the clubroom is more of an afterthought for the OutClub, as it’s placed at the end of every episode in scenes that are markedly tangents to the central story. Having a ‘C section’ after the credits isn’t an uncommon format for 23 minute anime episodes, but rather than just supply irreverent comedy, Yuru Camp’s C sections repeatedly remind us that the the life of the OutClub exists beyond the room that would usually give it meaning. 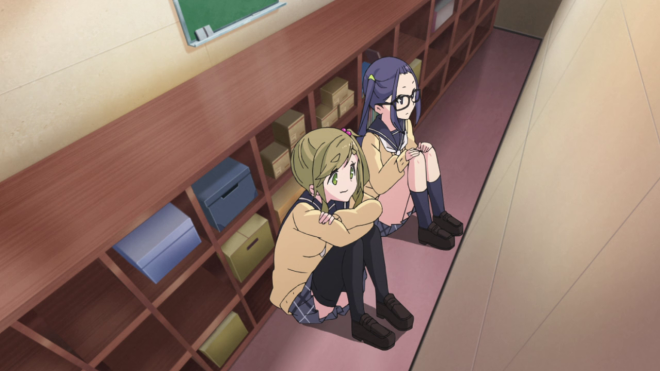 The girls don’t just break out from the boundary of a clubroom, though – at times they riff off information about camping that an unnamed narrator is announcing. The barrier between the girls and the lens of the show capturing their lives regularly dissolves, inviting the viewer into a closer and more immediate position alongside them and their experiences. Yuru Camp does not want us to think that these girls’ blissful lives are beyond our own, which strengthens the show’s focus on the girls’ relationships with one another. Though they all come from different backgrounds and with different perspectives on life (the dialects of Chiaki and Aoi, performed by Sayuri Hara and Aki Toyosaki respectively, emphasizing this well), the comfort they collaborate in making encourages us to see them as being deeply connected by the simple lives they share with each other.

In episode 5, we’re treated to the comedy of two starkly different camping experiences. Nadeshiko and the OutClub enjoy the indulgences of a hot spring, but Rin’s hopes for a similar experience are thwarted by the closure of the spring she planned on attending. It’s easy to place ourselves in Rin’s shoes and let disappointment be the focus: but rather than focus on herself, Rin’s attention is primarily towards Nadeshiko. After she’s sent a picture of an incredible view that Nadeshiko has found, Rin releases herself from relaxation in her tent and treks further up the mountain to give Nadeshiko her own special view. This is all brought together in a final still image, where Nadeshiko and Rin are figured as standing side by side, looking at the same cityscape, looking out from the same point of escape, instead of being at different places. 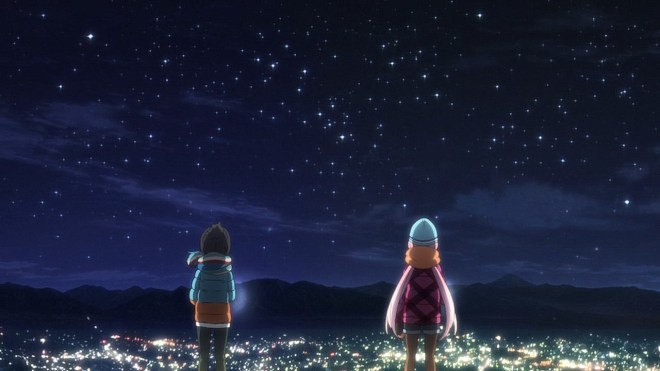 It’s this kind of connection that feels like a realistic kind of comfort. In an interview originally published in Akiba Souken, Yoshiaki Kyougoku praised the original manga, saying that, ‘as illustrated by the relationship between Nadeshiko and Rin, the moderate sense of distance between them which doesn’t get too close or too distant feels very natural and real’. The girls aren’t simply happy and cute – they share their lives in a way that genuinely connects them together without them collapsing into one single indistinguishable blob of moe and bliss. Even at the end of of the show, Rin remains to have a sense of independence about her: it’s her strength, though her willingness to share her camping experiences made the happiness she finds even stronger.

It’s poignant that Yuru Camp goes beyond the physical when it talks about how places can bring people together. The girls regularly rave about camping technology that could enhance their trips (while often bemoaning the price tags), but the advancements that first world countries have made in transport and communications are also crucial to how our characters make and develop their connections. Rin would never have met Nadeshiko if not for the existence of buses, and Rin would unlikely be as much of a camper herself without her trusty Yamaha Vino moped. Instant messaging keeps Ena (and her fluffy dog Chikuwa) by Rin’s side while she camps out alone, which helps emphasize that Rin’s solo camping habit was never an escape from everything else in her life. Through the internet, we too can turn solitary experiences into shared moments, and thanks to all the vehicles we have at our disposal, places we’d want to share with others don’t have to feel so distant. 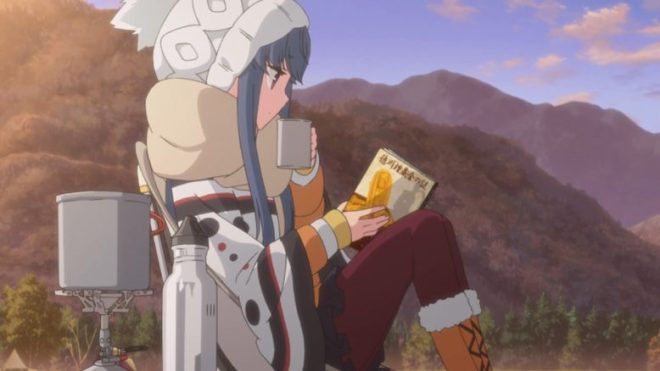 Yuru Camp celebrates the simple life, the baseness of the great outdoors, but it also revels in how technology helps us get more out of nature than ever before, if we use it right. For viewers, this can be a reminder to consider what they’re doing with the screens and devices that they’ve watched the show on. Are we using technology to escape from the world, or to better escape into it? At the click of a mouse we can see the greatest natural wonders of the world, but has the beauty of the Earth become commodified when we can have Mount Fuji as our desktop wallpaper?

As technology advances more and more, we need to not forget that the world around us only means as much as it matters personally to us. A picture of the Grand Canyon means a lot more if you’re the one who took it – it means a lot more to share too. As much as Yuru Camp is iyaskikei, it also carries an urgency to not miss out of seeing the world for yourself. Many have already been visiting the real-life camping grounds of the show; while watching a show like Yuru Camp can be ‘healing’, acting upon its ideas can make it so you’re living a fuller life than before. 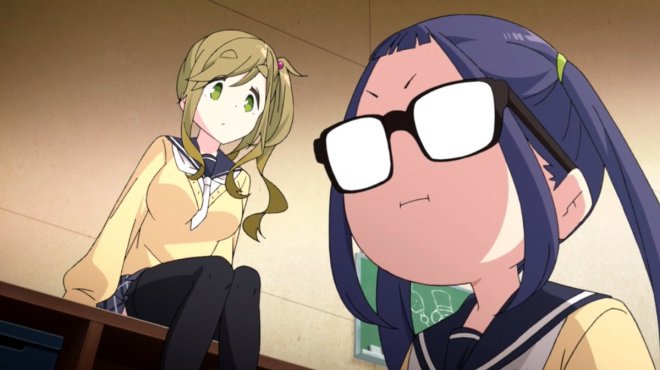 But just as the OutClub doesn’t need a clubroom, viewers don’t need to buy a tent or make hotpot in the great outdoors to feel like they’re joining in on the girl’s fun. At every turn Yuru Camp emphasizes that it’s not only what we do in life that matters, but how we share it with others, and how we appreciate what’s shared with us. In the end, I didn’t feel inspired to go camping by Yuru Camp, because all the comfort I could want from following in the girls’ footsteps is already there for me while I’m watching the show. I also don’t have much money to travel with! Aside from watching the show, all I felt compelled to do was share how much happiness I found in it with other people. But that’s what makes Yuru Camp such a strong iyashikei anime: whether you’ve been on a pilgrimage to all the places the girls camped at, or you’re simply wrapped up in a blanket at home while you watch, you can find a really meaningful connection to the cast and their adventures.

The next time you’re using social media, think about how you can share something you’ve seen or experienced, in real life or anime. You never know who could connect to it, and how important it could be for them. If Yuru Camp has taught me anything, it’s that we can get out of the tight and lonely spaces we can find ourselves in sometimes, and help other people do the same, by making our lives like campsites – open to being shared by anyone who wants to treat them with respect. 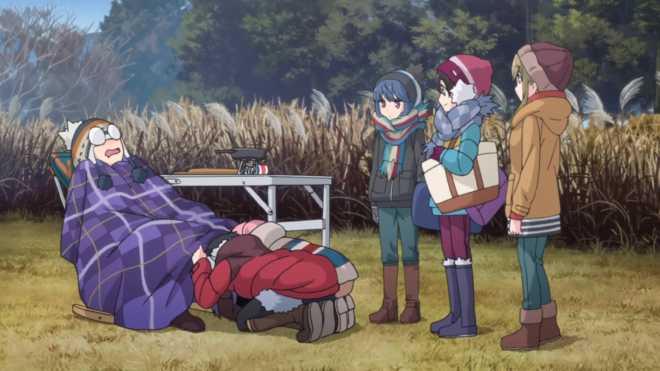 It’s been a while! UEM! is officially back from hiatus. I’ve got a lot I want to write about!

If you have a dollar spare, supporting UEM! will help me get closer to being able to make content on anime and otaku culture full-time.

One thought on “Yuru Camp: Out of the Clubroom, Into the Campfire”