More than a year ago I wrote a long piece on moe, an otaku’s response to cuteness which has been frequently discussed but rarely defined. While that article served as a place to unpack many of my thoughts, it was also a reactionary piece to an article from The Mary Sue, and became mired as a result in a kind of ‘anti-feminist’ discourse that got me a few too many rabid ‘these women want to kill all men grrr’ followers as a result. A lot of them have since lost interest in this blog given that I’m not actually interested in their ‘feminism is cancer’ perspective.

Granted, I was bitter towards how such an interesting affective response was being portrayed by The Mary Sue, and how Galbraith’s work had been glossed over as ‘misogynistic’. I was especially jaded by how the female voices in his studies – which while being fewer had brought some brilliant observations to the table – had been sidelined rather than drawn out. There’s still a pervasive myth that otaku spaces are a men’s world, and that moe is a man’s code for a misogynistic, infantilizing view of women, which ignores how moe is used by fujoshi and the strict division of most otaku between the virtual and the real. But one quote from Galbraith’s The Moe Manifesto, from voice actress Momoi Halko, has stuck with me throughout my musings on what moe means to many different people:

“More than a desire to date a cute girl or anime character, it is a desire to become her.” 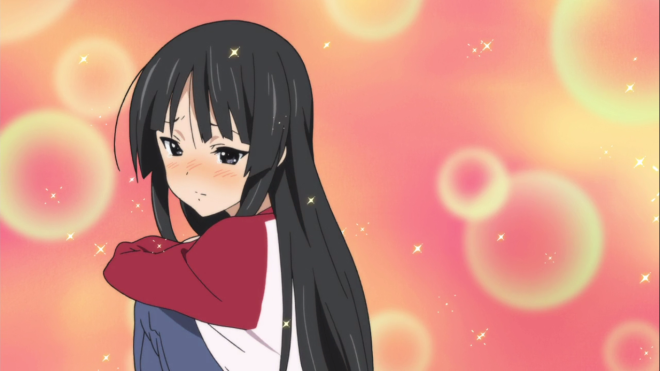 I want to revisit these words, because recent developments in the media and technology at the hands of moe-loving otaku has given them a new life. Expressions of ‘becoming’ have up to now been mostly limited to accounts from otaku themselves, which tend to be distrusted by skeptics or seen as merely an exploitation of female representation. But there’s a lot of new evidence springing up for this idea of ‘becoming’. One such development lies within a meme.

If anyone asks me to point to a sign that we’re living in an era unlike any other – an Information Era, a postmodern age teetering on starting a new chapter altogether, I would begin to talk about memes. From the Greek mimēma, ‘that which is imitated’, a ‘meme’ is a symbol of transformation, a method of new communication born from New Media – a cultural idea that begs you to take it apart, rearrange it, and make it into something new. The language of ‘memes’ has existed in various forms over millennia, but only through the internet has it reached its climax of sudden deconstructions and endless pulsating permutations of humour, satire and self-awareness.

It gave me great pleasure to watch a new meme be ‘born’ on Twitter at the end of 2017 – a meme for otaku worldwide, which seems set on redefining our perspectives on protecting the planet.

Earth-chan started as a joke about flat-earth theorists, building upon the memetic material of virtual, insecure flat-chested girls. It was proposed that an anime should be made about the solar system, with ‘Earth-chan’ feeding into the traditional trope:

Trinimmortal’s tweet marks the difference between a joke and the birth of a meme. It wasn’t long before other artists chimed in and started to actively mine both the makeup of anime girls and cultural ideas about our planet, in order to give Earth-chan even more dimensions of expression. A critical turning point was reached after the anthropomorphized planet began to be drawn sometimes with a surgical mask, which sparked a connection between the moe icon’s state of cute vulnerability and the vulnerability of our planet to conditions like global warming.

In a matter of days, the repetition and deconstruction of the ‘Earth-chan’ meme had spread into depictions of her as a subject of abuse, covered in bruises and plasters. This would be often figured as an abusive relationship with ‘human-kun’, within which she would express that she ‘still loves’ them in spite of their treatment. Who would have thought that a simple anime trope would lead to a darkly comedic re-invigoration of our responsibility to care for the planet?

Yet, this is predictable when we think about moe. By figuring the Earth not as a warrior or a Godly figure, but rather as an adorable, fragile creature, the dual affect of moe rolls into motion. The viewer who feels moe feels two things – a desire to protect the object and its expressions of youth, and a desire to identify as it, to become it. Rather than clash, these two strands of feeling merge to form the feeling of self-protection that runs through every CGDCT show. Earth-chan offers a platform for people to actualize these feelings while drawing them into relevance with something beyond the self – the planet that the self inhabits – by drawing that surrounding into the self. The lines between humanity and its habitat are collapsed.

Though she can be taken as a joke, beneath the laughs lies an honest truth: we have a duty to protect our planet as much as we have a duty to protect ourselves. Otaku are often accused of being overly insular – the junsui na shohisha (pure consumers) of some otaku cultures are described by Galbraith, in his study of maid cafes, as being ‘shut away in pleasure rooms and disconnected from social and political concerns’. But Earth-chan figures an expression of moe self-care being expanded into care for one’s surroundings. I think this is philosophically fascinating.

On the other hand, Earth-chan is still the same kind of hyperflat creation that occupies many otaku spaces – she doesn’t exist, and she resides on a screen or page away from you. Even with characters like Hatsune Miku, which communities can ‘become’ insofar as every part of her image, music and identity is made by their input, the brain has to take a specific step to identify with them to the extent of ‘becoming’. But technology has advanced further than producing the potential for memes to spread instantly and concerts to be held for virtual pop stars – technology has finally given us affordable ‘virtual reality’. While critics were initially skeptical of its use, with VR versions of popular games often riddled with flaws and original VR software seeming to be limited, there is no doubt that VR bears a part of the future of online communication. Right now, that future is manifested in the free software known as VRChat. 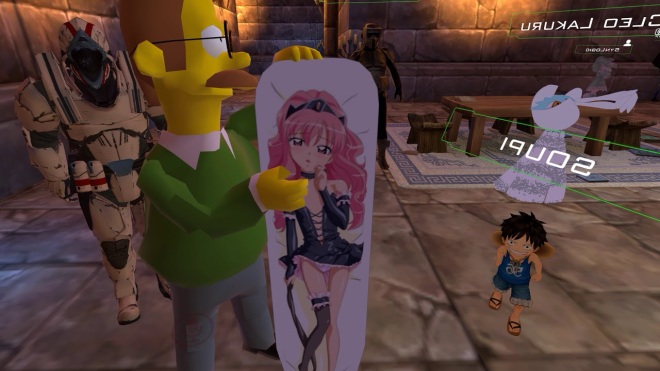 VRChat is a space for users with or without virtual-reality headsets to become whatever avatar they wish and meet together in whatever virtual spaces the community creates – someone has already made the entire map of The Wind Waker. For VR headset users, the extent of control you have over your avatar increases, and your immersion in the world does likewise. Already new memes have sprung up, unique to this space, like the roving armies of tiny Ugandan Satanist knuckles avatars. But a different, wider cultural phenomenon can be observed by watching VRChat streams and videos – the fascination of male, anime-watching users with performing their identity in the virtual space as bishoujo. VRChat is the closest opportunity many male otaku have today for ‘becoming’ a cute, virtual girl – escaping their usual masculine codes and experimenting in a space of fantasy play with the identity of a ‘loli’ or a ‘waifu’.

Last night I watched popular streamer LilyPichu try VRChat for the first time, and she couldn’t help but remark at the strangeness of having her male tour-guide depict himself as an anime girl. At the end of their adventures, ‘Woops’, the tour-guide, gave her a goodbye hug, which noticeably caused an affective response in Lily. Of course, the skeptical user could go around making every effort to see through the ‘disguises’ of VR avatars, but that would defeat the point of the medium much like ending every sentence of a novel with ‘but that didn’t actually happen’ would defeat the point of fiction.

Due to the nature of Virtual Reality, it is possible to use VRChat to present and perform many of the dissociative fantasies otaku have used spaces like maid cafes for in real life. But this presents the same potential problems. While Galbraith’s experience with maid cafes emphasizes the aspect of ‘pure fantasy’, Shari Savage ends her paper on Lolicon with an example of an American ‘lolita maid cafe’ meetup going horribly wrong. There is every potential for predators to abuse the virtual veneer of VRChat and prey on children performing as children, justifying their actions as a kind of fantasy when their desires are genuinely associative and dangerous to those around them. But there is also potential for people secure in the dissociation of their fantasies to play with performances of gender and age with proper boundaries attached.

Given that it already seems to be improper for people in VRChat to try to make a big thing out of someone’s ‘real’ identity traits, it seems that the software could be a place for ‘2.5D’ expressions of moe to abound like never before. Scenes from popular anime and visual novels can be acted out, and fans of certain anime girls can ‘become’ them to the extent of occupying an alternate reality through their body. Virtual reality has the potential to be the ‘post-ethnic’ space some scholars have seen otaku cultures as dreaming about, with people’s identities purely a performance built on memetic language. I’m really excited for how many great case studies VRChat, and any software like it, will provide for otaku to better explain their mindsets to people, and for scholars to study and learn from too.

In 2018, the world is a virtual girl, and otaku of any gender can be virtual girls in a virtual world. It’s a great time to be a fan of moe, and it looks like things will only get better from here. 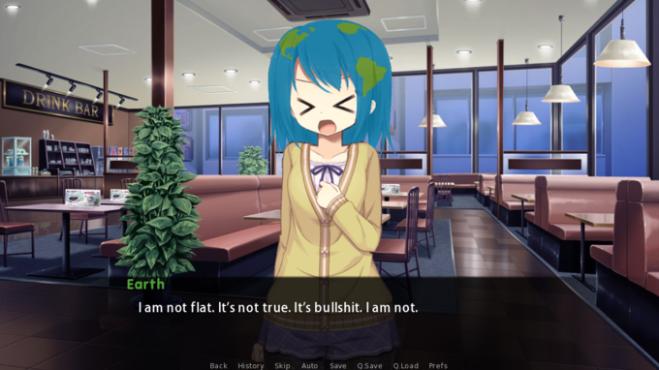 I’d love to explore VR myself, but technology costs money. If you’re interested in helping me cover the costs for equipment, please consider checking out my Patreon. Thank you!

5 thoughts on “Earth-chan, VRChat and Becoming the Bishoujo: More Reflections on Moe”