How do you solve a problem like Ayumi? In half an episode, apparently.

This episode was split into two paths, and I’m worried that neither has had the impact Maeda may have wanted. Shun’s back-story was fittingly blunt and expedient, but it was also a history of what feels like the show’s biggest conflict against the evil forces of science/adulthood. The summarized tale didn’t do anything to help the fact that the scientists are feeling like less and less of a threat – first Nao’s brother is conquered by the power of music, and now the ability users will be safe in the many schools that Shun planned to be made. It draws a lot of attention away from them and towards the more personal conflict around Yuu, and it’s a shame that the thematic dynamite of the powers relating to pubescence and the scientists being adults hasn’t been capitalized on much.

As for the salvation of Ayumi, I get it – she’s not actually safe yet. We’re supposed to feel like that all went too smoothly. The continued lack of detail for Ayumi’s attacker made it easier to enjoy seeing her terrified and gave Yuu and Nao’s display of power more of an impression. I get that we’re supposed to feel that Yuu will have to pay a price for having her back. Yet, the possibilities as to what may threaten Ayumi feel as invisible as Nao was during episode seven. Sara’s blindness surely links to Shun’s, but the possibility of Yuu losing his eyesight doesn’t sell itself as a climactic danger. It feels like two important strands of the plot’s conflict have ended – the fight against the scientists, and the fight to save Ayumi – and Maeda may have to get us to board a whole new feels train if the end of the series is going to pay off in typical Key fashion. 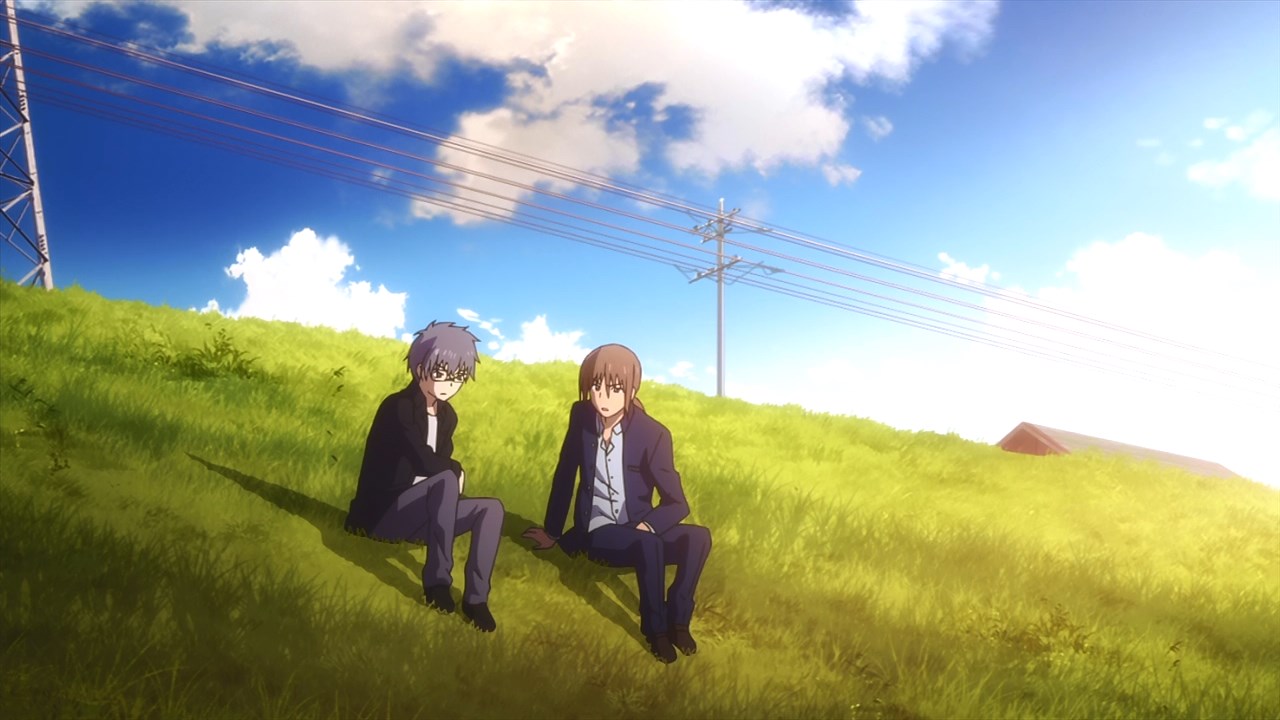 We at least have more understated character developments to enjoy. Pooh’s power doesn’t actually need water, and our misconception on that matter can be attributed to Nao, furthering her manipulative side that I’m in love with. Her and Yuu are also becoming closer and closer together – note Yuu’s response to Ayumi’s teasing this time round – in contrast to Takajou and Yusarin being officially relegated to comedy fuel (even though I found Yuu’s penchant for head injuries this week more funny than them). Yuu’s explanation of what Nao technically didn’t do shouldn’t be seen for its negative aspects. It’s not like they’ve missed out on that bonding time – Yuu has already bonded to Nao through it, and his gratitude was for the knowledge that she would have done those things; he’s thanking her heart more than he is her deeds.

Then again, the time leap means that Yuu now has to save Nao’s brother all over again. It doesn’t feel like it should be too much of a stretch, but will Yuu be able to repeat the same sequence of events now that Ayumi is around? It now makes sense that there wasn’t much aftermath for the first time he saved him, as the real rescue for the brother will come in the next few episodes – it may even be part of the greater climax. Still, I can’t see Yuu having much trouble getting Sara to cooperate again now that he has the syndicate, and any power he wants from them, to work with.

The fact that Yuu has all sorts of powers now also gave me another window into Nao’s manipulative side – she’d been making sure the scientists couldn’t get to the individuals they went after by having Yuu steal their powers. This subtle, kind of cruelty of hers was also expressed through how she snipped the fringe of Ayumi’s attacker. It all makes me think that there may be one last trick up her sleeve, and it’s good that the show is geared towards investment in her character, since the mysteries surrounding Yuu have mostly been solved, and the calmness of earlier episodes can be attributed to her loving but manipulative schemes goes all according to plan. When, then, will Nao fail in what she devises?

I’m far more interested in her than I am in Yuu. The problem with time travel is that it eliminates a lot of the depth behind the tragic spectacles that the show has thrown at us; no action or loss feels permanent unless causality is a rule, and Yuu is now that master of this – on top of the narrative, rather than subject to it like Nao remains to be. The only limitation is that the past can only be redone so many times, which implies that our climax could only involve a ‘last chance’ scenario similar to the one Shun faced. But where will the impact be in anything bad that now befalls Yuu or those he cares about? The thought that he can fix any problem prevents the immediate belief that anything is dangerous. Unless he’s bound and blindfolded by the scientists, I can’t see much coming from a downward turn next episode – and if he is locked away, what will we do without our protagonist?

I lost a lot of my built-up interest in Charlotte last week, and this episode has only maintained the show’s feeling of clinging on to the edges of significance. It isn’t the end, but it feels like a lot of things have finished, and not in ways that have left much of a lasting impression, happy or sad.

Last season’s PlaMemo made the mistake of solving its conflicts too early before the finale; lets hope Charlotte stirs up something special, to make the last few episodes blow this false resolution out of the water my hopes could otherwise drown in.

For example, where are all the parents?